Once the Flowers Arrive, the Real Magic Begins

In just one year, Random Acts of Flowers Indianapolis has delivered more than 17,000 flower arrangements to the area’s most vulnerable residents in hospitals, nursing homes and hospice facilities. The organization already has its eyes on year number two.

Since its inception, the business has stayed true to its mission — to improve the emotional health and well-being of individuals in health care facilities by delivering recycled flowers, encouragement and personal moments of kindness. Now, it’s looking to continue fulfilling that mission by adding another partner.

Potter recently met with Linda Ryser, patient liaison and manager of service excellence and volunteer services at Indiana University Health West Hospital in Avon. Ryser said the two talked about the mission, the history of the business and the organizational structure of the company.

“IU Health West enthusiastically agreed to partner with Random Acts of Flowers,” Ryser said. “Besides their mission of providing encouragement and kindness to patients, Random Acts of Flowers is also dedicated to recycling 100 percent of the arrangements they receive in order to keep these floral materials out of landfills. This is hugely important to the employees of IU Health West who have been participating in a recycling program at our hospital for several years.” 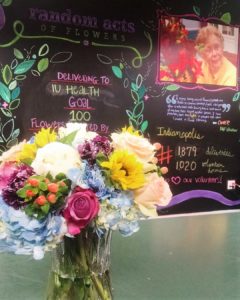 The Indianapolis chapter is part of the national organization of Random Acts of Flowers. The company’s founder and CEO, Larsen Jay, was in a near fatal accident in 2007. He was overwhelmed at the hospital with flowers from people showing their support and said that impacted his recovery.

“He saw people come and go that didn’t have visitors,” Potter said. When he got better, he repurposed his flowers and set out to deliver the first “random act of flowers.”

The company then formed in 2008 in Knoxville, Tenn., and has added locations in Chicago, Silicon Valley, Tampa Bay and Indianapolis.

Random Acts of Flowers operates within a 30-minute radius from Indianapolis. The company has delivered to locations in Plainfield and Brownsburg.

Donated flowers are brought to the organization’s shop, whether that’s by individuals or companies. Random Acts of Flowers receives flowers from funerals, weddings, wholesalers (flowers that didn’t sell) and grocery stores (because of sell-by dates).

For example, someone can’t call Random Acts of Flowers and send $30 to have flowers delivered to grandma at the hospital. That still falls under the floral industry.

Once the flowers arrive, the real magic begins.

“We have a team that takes everything apart and sorts through what we can/can’t use,” Potter said. “We compost what we can’t use.”

Once the flowers are sorted and deemed good enough to reuse, arranging begins. The volunteers usually have a goal to make about 200 flower arrangements a day.

Afterwards, the flowers are delivered with the help of staff at hospitals and nursing homes and Random Acts of Flowers volunteers.

The organization works closely with hospitals and other medical facilities to figure out who to give the flowers to. Some base it on who needs it the most, who hasn’t gotten flowers/visitors or if someone receives life-changing news. Other hospitals have a policy if one person on the floor gets an arrangement, then everyone does.

“We believe in the power of flowers to enhance moods,” Potter said. “It’s really about that connection.” 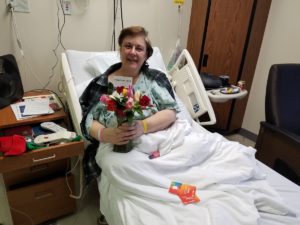 Looking ahead, Random Acts of Flowers Indianapolis hopes to deliver around 25,000 arrangements next year.

“We are trying to create new partnerships with hospitals,” Potter said. “We constantly want to find new places and new flowers to rescue.”

Random Acts of Flowers is finalizing the preparatory work with the hospital in hopes that the bouquets will be delivered to patients within the next few months.

Overall, the success has been overwhelming. “Indianapolis has been great for

One of the big areas the organization needs help with is vases, which can also be donated at the office. They go through about 300 a week.

“When you see an organization such as Random Acts of Flowers reaching out and sharing joy in this way, it not only lifts the spirits of the patients, but also their families and friends, the caregivers who treat the patients, and the community as a whole,” Ryser said.